A first. Three models. One cover. Going to press tonight. 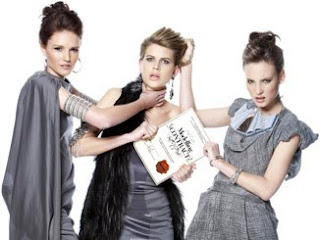 Who's going to be Australia's Next Top Model?

The three models up up for the ANTM crown are (L-R) Amanda Ware, Sophie Van Den Akker and Kelsey Martinovich.

And in a world first for the Top Model franchise three girls are in the running to nab the title. To be decided in mere minutes.

The three hopefuls are Amanda (18, from the Gold Coast), Kelsey (19, from Sydney) and Sophie (19, from Melbourne). This sixth series of of the popular show has been the highest rating season ever and it all comes to an end right now.

Update: Sophie (the blonde cropped-hair model is out).

My fave part? That the presses for the November issue of Harper's Bazaar - on which the ANTM winner will feature as covergirl - will apparently start rolling the moment the winner is decided. I love the drama of magazine deadlines, so this is a huge drawcard for me - and many - to buy the issue.

Update: and in the shocker of all live TV shockers, the wrong name was called out by host Sarah Murdoch. Watching the tape back, the moment when Sarah realises she has been fed the wrong name into her little earplug is something to behold. Mortified doesn't cut it. Poor thing is dying a thousand deaths. Someone is sooo getting their butt fired in the control room, methinks.
Posted by Josie at 21:04