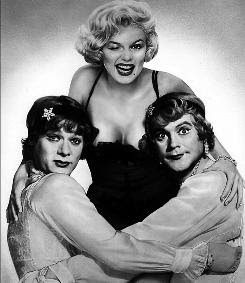 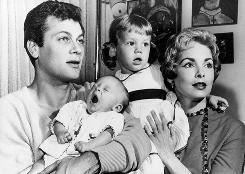 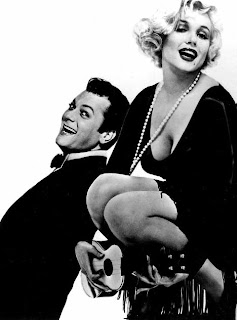 Hollywood actor Tony Curtis has died of cardiac arrest at age 85, while at his Las Vegas home.

Even though he earned an Oscar nomination for his role as a an escaped convict in The Defiant Ones, Curtis was best remembered for his role alongside Jack Lemmon and Marilyn Monroe in the Billy Wilder 1959 comedy classic Some Like It Hot. He certainly did rock the dress and heels combo, but the captain's outfit he wore in this flick did it for me.
That movie made me appreciate old-school, slapstick style comedy. And he represented for me one of my first crushes (equal first was the handsome Elvis Presley). Tony Curtis was just too gorgeous in this movie. Amidst the ill-fitting dresses and bad make-up, it was difficult not to notice how incredibly dashing Curtis was.
In the cult flick, Curtis plays a jazz musician on the run from the mob alongside crazy cohort Jack Lemmon. Along the way, they get more than acquainted with singer Sugar Kane (played by Marilyn Monroe). The hijinks they get up to along the way are hilarious. I could watch that movie again and again. If only to stare at Curtis.
Curtis was the son of Jewish immigrants from Hungary, and was born Bernard Schwartz in New York, in 1925 and survived the Great Depression, and abusive mother, and being sent to an institution.

After a stint in the navy during World War II, Curtis began acting lessons in New York and soon landed a contract with Universal Pictures in 1948.
Off screen, Curtis was said to be legendary for his ways with women, which resulted in six marriages and liaisons with such Hollywood icons as Monroe and Natalie Wood. His first marriage in 1951 was to actress Janet Leigh, his co-star Houdini, and that produced two daughters including actress Jamie Lee Curtis (she with the rockin' bod in True Lies, A Fish Called Wanda, and more).
Curtis's career was thrown off track somewhat in 1962 when he divorced Leigh after an affair with a 17-year-old German actress named Christine Kaufmann, whom he married the next year. That marriage lasted five years, and after divorcing her, he married 23-year-old model Leslie Allen.

Until the day he died he remained committed to his last wife, Jill Vandenberg, to whom he was married for almost 12 years.

He had four daughters, and one son, who overdosed at age 23.

His daughter Jamie Lee said: "My father leaves behind a legacy of great performances in movies and in his paintings and assemblages. He leaves behind children and their families who loved him and respected him and a wife and in-laws who were devoted to him. He also leaves behind fans all over the world. He will be greatly missed.."
RIP TC.
Posted by Josie at 23:28