Harper's Bazaar November Cover. It's Kelsey! Jks. It's Amanda. And here is the footage of the live TV epic fail. 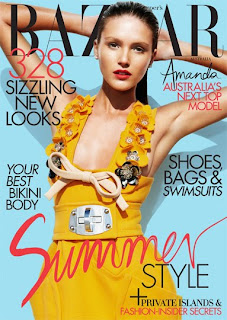 Here is the 'controversial' covergirl of the upcoming November 2010 issue of Australian Harper's Bazaar.
It will forever be dubbed controversial thanks to a mix up at the final bell - host of Australia's Next Top Model Sarah Murdoch was fed the wrong name into her little earplug thingy and called out Kelsey as the winner of 'cycle 6' of the hugely popular Foxtel series.
Moments later, Sarah is beyond mortified when she is told via that same blasted little earpiece that the winner was in fact Amanda.
I was watching but not watching - after all, they'd called out the winner's name and all that was left was the hugging and fake kissing - when all of a sudden I was hitting hubby hard (in that Elaine from Seinfeld kinda way), gasping that they'd effed up the winner's name.
You don't understand, I told him. It's like announcing Liverpool FC as the winner of a hotly contested comp, then all of a sudden realising that on goal average - or something - arch rivals Manchester United had won. Ma che disastro!
In the end, Sarah acted with as much dignity as she could possibly muster, as she dealt with not only reading out the wrong name, and the wrong cover coming up on screen, but also the ramifications of a live TV anti-climax... and a devastated non-winner to boot.
I really can't help but wonder what Jodhi Meares is thinking. She was the previous host of the Aussie version (Erika Heynatz was the first), and was 'crucified' by the media for her deer-in-headlights live TV finals performance years ago (I thought she did quite well, bless 'er).
And here is the footage of the live TV epic fail: http://www.youtube.com/watch?v=PKb0BR-giCA
Posted by Josie at 21:53