Joan was hospitalised last week after a heart attack during a routine surgical procedure, and had been on a life support system since the weekend.

Her family made the decision to Joan off life support today; it is understood she died shortly after.

"It is with great sadness that I announce the death of my mother, Joan Rivers," her daughter Melissa Rivers said in a statement. 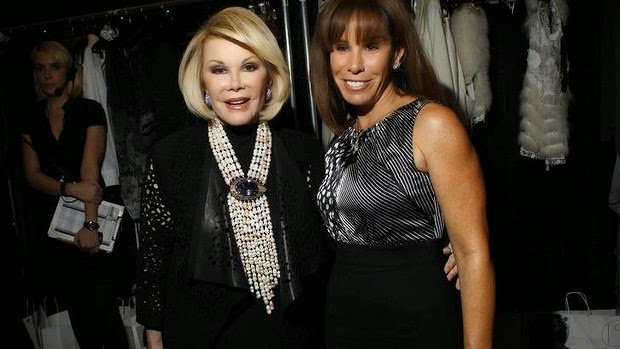 The statement continued: "She passed peacefully at 1.17pm [New York time on Thursday] surrounded by family and close friends."

Melissa said she and her son Cooper were "humbled by the outpouring of love, support and prayers we have received from around the world."

"They have been heard and appreciated, "she added.

So sad. From recent experience (my mother passed away three weeks ago), I now know that a coma and "resting comfortably" never sounds as good as it makes out...

This is one of Joan's last TV talk show appearances, five months ago, on 'The Tonight Show Starring Jimmy Fallon':

Email ThisBlogThis!Share to TwitterShare to FacebookShare to Pinterest
Labels: Emotional, Everyone is talking about, RIP, RIP. Celebrities, Sad, This Just In