Nine News has just reported that Nicole's father Dr Antony Kidman - a respected clinical psychologist, biochemist, and author who was often seen on TV's 'The Morning Show' - has died after a fall in Singapore. Dr Kidman is also the Director of the Health Psychology Unit at Sydney's Royal North Shore Hospital. He was awarded an Order of Australia medal in 2005 for his contributions to clinical psychology.

It is believed he was visiting his younger daughter Antonia, who lives in Singapore with her family.


UPDATED: 11pm Friday: Nicole's publicist and friend Wendy Day told the Daily Mail on Friday, September 12, "The family is in shock and is grieving. I think that some time and privacy is needed to deal with this shock and tragedy."

UPDATED: 4.30pm Saturday: cause of death

According to The Straits Times in Singapore, Dr Kidman died after suffering an apparent heart attack at The Tanglin Club where he had been staying.
He is believed to have collapsed when he was at the club's Wheelhouse restaurant, after completing his morning exercise. A doctor who was present tried to resuscitate Dr Kidman.
A spokesman for the Singapore Civil Defence Force confirmed that it received a call at about 8.10am on Friday requesting for medical assistance at 5 Stevens Road, where the club is located, reports The Straits Times. When paramedics arrived shortly after, a few members of the public were already performing cardiopulmonary resuscitation on a Caucasian man in the restaurant, the spokesman added.
Paramedics carried on trying to resuscitate him on the way to Tan Tock Seng Hospital (TTSH), where he was pronounced dead. Police confirmed Dr Kidman was pronounced dead at TTSH at 9.54am. They are investigating the 'unnatural' death.
Dr Kidman was staying at The Tanglin Club as his son-in-law Craig (daughter Antonia's husband) is a member there.
He had been visiting his younger daughter, Antonia, 44, who lives in Singapore with her banker husband and their six children.

Nicole's husband Keith Urban cancelled an appearance at a charity concert to rush back to his wife’s side at their Nashville residence.
“I’m so very sorry that I cannot perform this weekend,” Keith Urban wrote on his Facebook page.
“We are in a deep state of grief at the passing of Nic’s father and are heading to Australia to be with family.
“We want to thank everyone from the bottom of our hearts for their love, prayers and support through this devastating loss.”
Nicole’s sister Antonia has already arrived with her children at the Kidman family’s Greenwich home in North Sydney shortly before midday today.
Dr Kidman was also respected clinical psychologist at the University of Technology in Sydney.

Attila Brungs, a colleague at the university, released a statement to Reuters on Friday: "It is with great sadness that we learn of Dr. Tony Kidman’s sudden passing. During his 43 years at the University of Technology, Sydney, Tony has contributed greatly – as a colleague, as a researcher, and as a health practitioner. Tony will be missed by all at UTS. Our thoughts are with his family at this time."


Condolences to the Kidman family. Dr Antony Kidman is survived by his wife of 50 years Janelle, and his daughters Nicole and Antonia, and


Here is Dr Antony (sometimes referred to as 'Tony') Kidman's most recent TV appearance on 'The Morning Show', on August 20, 2014:


Here is a speech given by Dr Antony. Published on 10 Apr 2012, it is subtitled: 'How do we achieve emotional health despite stress and alienation in today's challenging world?'


It continues: "Is life more stressful today than ever before? Is the rapid pace of change leaving many of us feeling powerless, frustrated and blocked from achieving the happy lives we all aspire to?" 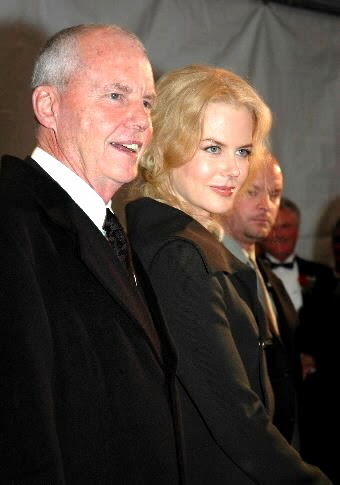