Jimmy Fallon and Justin Timberlake star in Apple's first ad for the iPhone 6 and iPhone 6 Plus… but you can't see them!

The two sing "Thus Spoke Zarathustra," aka the theme from '2001: A Space Odyssey' in the ad, which features the two stars' hands, but not their faces. The ad's tagline? "Bigger than bigger."
Here it is:


And here is the Apple video explaining the new phones:

And now, the Apple watch (NOT called the iWatch, as some sites are reporting):

The iPhone will be available in Australia on 19 September. The Apple watch will be on sale from early 2015.

Here's a short rundown of the phone comparisons, below: 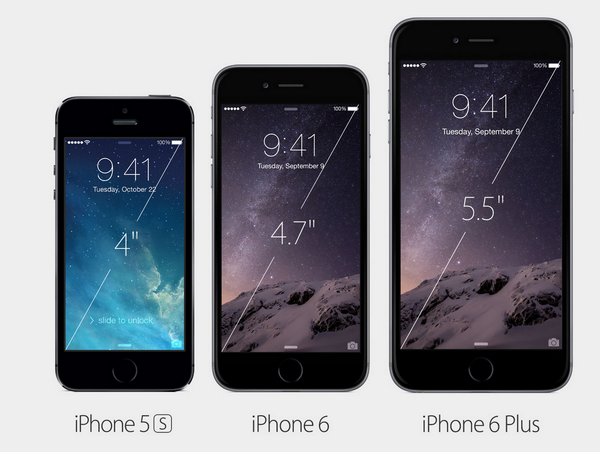 - larger and flatter than previous iPhones
- it's 6.6mm thin and almost 12cm high

The iPhone Plus is:

- almost 14cm high, and only 7.1mm thick.
- it includes a few extras not included in the iPhone 6, including: a fitness tracking chip inside the phone that can tell if you’re running or cycling, and optical stabilisation for removing camera shake, especially in low light situations.

Both phones are faster — and their batteries last longer.

Best development ever. Apple claims the new phones, which are available in gold, silver and grey, are four times faster than the original iPhone.

And the Apple watch features:

Apps are a key feature of the Apple watch. It tells the time (yes!), it's a communications tool, and health and fitness device - in one.

It comes with two apps which gather data like your heart rate, and can provide a daily snapshot of your activity and fitness goals. The Apple watch also shows you (via apps) where you parked your car, hotel apps that allow you to check in from the Apple watch, and an Apple Maps app gives you directions.

There will also be three different Apple watches: the standard version, the Sports model, and the Edition model - the latter of which is made with 18 carat gold. Yep.

Optus will this week begin offering $200 toward an early termination fee plus about $250 credit for trading in an old smartphone.
And Telstra has announced they will be offering the same deal as Optus, effective from September 16. They are also removing their 'New Phone Feeling' fee - the $10 a month fee which allows customers to upgrade to a new handset in 12 months, rather than the usual 24.
So, if you can't wait, that's effectively $200 towards allowing customers to start their new iPhone plan around three months early, at no extra cost.
When the iPhone 5 went on sale two years ago, it's estimated that 1.5 million handsets were sold in the next few months - and now, those buyers would be looking to sign new contracts.
Posted by Josie at 10:00

Email ThisBlogThis!Share to TwitterShare to FacebookShare to Pinterest
Labels: Americana, Australiana, Everyone is talking about, New Stuff, This Just In, Toys