"If I died this morning, nobody would say, ‘so young’." Joan Rivers with Melissa: VIDEO

'Joan And Melissa: Joan Knows Best' was a reality TV show about the comedian and her daughter, which premiered in January 2011 and ran until May 2014.

In this very emotional scene from the show (from the season two premiere in January 2012, when she’s about to go in for yet another round of plastic surgery), Joan (sans makeup) expresses her sentiments to her daughter Melissa in case she doesn't wake up from her procedure:

“I’ve had a great life - I’ve had an amazing life. If I died this morning, nobody would say, ‘so young’,” she says. “You’ve been wonderful, and we’ve had a great ride together.” TEARS!

“If something happens, things are fine, and life is fine. Life is so much fun, It’s one big movie… and how lucky we are. How lucky we are," Joan says matter of factly to Melissa.
Watch the whole clip here:


How good was the best bit, right at the end?

“The only thing that makes me a little sad is that Cooper’s not gay,” she says about Melissa’s son. “I have nobody to talk to Judy Garland about. If I die, who’s gonna want my showtunes collection?”

The show followed Joan after she moved to California to be closer to Melissa and Melissa's son Cooper. Melissa and Joan had actually begun hosting red carpets in 1994, as part of the E! channel's pre-awards show for the Golden Globes. From that dynamic, a whole new slew of live red carpet show were born.

Joan had also famously once joked: “When I die, they will donate my body to Tupperware." 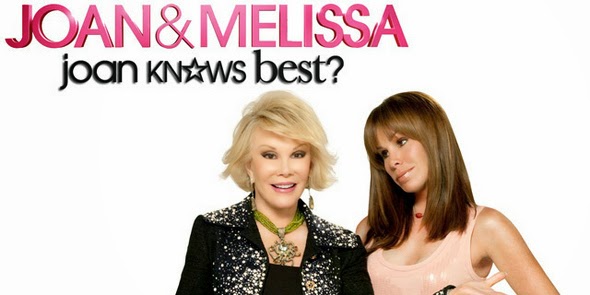 Email ThisBlogThis!Share to TwitterShare to FacebookShare to Pinterest
Labels: Celebrities, Emotional, Everyone is talking about, Hollywood, RIP, RIP. Celebrities, Sad, This Just In, Viral Videos