So, I watched the whole of episode one and two of 'Married At First Sight', and if the preview was meant to have me hooked, it worked.

The process of getting these couples - eight people, four men and four women in total - matched up (according to psychologist John Aiken, psychologist Sabina Read, and neuropsychotherapist Dr Trisha Stafford) and then to the altar is something I found to be quite fascinating. In fact, I would have liked to have seen even more of why the experts chose who they did choose as matches. Watch the first episodes and you'll see what I'm talking about. Here are the eight men and women (they're not matched together in this photo below, by the way): 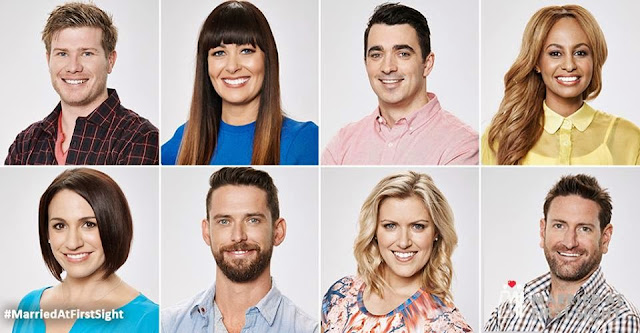 SO. Let's cut to the chase.

DOES THIS SHOW MAKE A MOCKERY OF MARRIAGE (I am shouting that because these are the words you will see strewn allllll over your social media feeds tonight).

I feel it DOES NOT. My reasons are below.

First, here's what the panel on 'The Mixed Grill' on the 'Today' show had to say.

"Does this show make a mockery of marriage," asks Karl Stefanovic of journalist Sarrah Le Marquand.

She says: "Of course it doesn't make a mockery of marriage; it has survived centuries, it has survived the advent of no fault divorce, it's survived Kim Kardashian," she says, amongst lots of laughter from fellow panellists.

Adds David Campbell: "Marriage has done a really good job of making a mockery of marriage. Look at the divorce rate, people get married way too quickly. This is a social experiment. I enjoyed watching [John Aiken and Sabina Read - the latter of which says she initially said no to this show when she thought it was an actual, legal marriage. You guys: it's NOT] this morning on your show, we're going to talk about it on our ['Mornings' - see link below] show. It's a social experiment, it's a commit ceremony, it's not a marriage."

Agreed, David! I am ALL for marriage equality. LIke, wholeheartedly, no shit: gay couples SHOULD be able to marry too. Not all gay couples want to marry, just like not all straight couples do. Some de facto couples are very happy staying that way; the same as some gay couples.

Adds Sylvia Jeffreys: "It's a little like RSVP online, but you just skip a few stages."

So, are we mocking marriage with this show? In my opinion, no.

To add to Sarrah's list above, the whole practice of marriage has survived cheating, and people still wearing a wedding ring while sleeping with someone else while their partner has no idea what they're up to. That's a mockery of marriage.

It has survived people who think that multiple partners in a marriage is okay. Not okay. Weird. It's a relationship implosion waiting to happen if you think having an open marriage where having sex with other people with each others' full 'consent' is normal. Sooner or later, someone deviates. That is a mockery of marriage.

But this: it's a show. It does not represent the decay of our society as we know it. Please.

Anyway, you guys: tune in. See for yourself. Revel in the utterly awkward moments of some (all) of the couples as they prep for 'the big day.' Some moments are so awks, you cannot look away. But gosh, they are fun to watch. Don't worry, they went into it with their eyes open. Nobody forced them.

Just watch it. It's TV! Not life or death. Get 'outraged' if you want… then have a wine and a laugh and just watch. Or don't.

Yup, exactly Claire. The whole country (*people who care about reality TV) will be scrutinising, and already there is much negativity on social media before the show has even screened (interestingly, the MOST vocal opponents of the show are the vast majority of people who have not seen it; most who have seen a full two-ep preview say they love it, can see it's different from what they expected, they know it's a social experiment, and they are FAR from 'outraged').

I am not outraged, I am not offended, I will not be told by others how I should feel.

Marriage is an institution I hold dear - I love it, in fact! To paraphrase David, it's so much fun I never want it to end. A show won't change my mind.

The segment from today's Mornings TV show is here where Lachlan, one of the grooms, is joined by Sabina.

The six part series - on each Monday night at 8.30pm - was filmed in Sydney and Melbourne last year, and the social experiment follows the newlyweds as they honeymoon, meet the in-laws and live together for a month, while trying to figure out if they really are a perfect match. Like the old 'Perfect Match' but on 'roids. And no Dexter.

A petition on change.org against it all has now surpassed its target of 15,000 signatures. It was to have the show not be screened. Yeah, that was never going to work.

Nine has responded to the petition, clarifying that the four couples do not actually wed in the legal sense.


Only commitment ceremonies have been undertaken (despite the dress and flowers, etc) and, after 30 days, the participants will decide whether they want to stay together or say bye for good.
“In order to comply with the Australian Marriage Act (1961) which requires one month and one day notification, a marriage in law was not conducted,” a Nine spokesperson told news.com.au.
“Each participant embarked on a commitment ceremony with a wedding celebrant with all due intention to commit fully to this union for the duration of the experiment. At the end of the experiment they are given the option to continue with the relationship or go their separate ways.”
If the couples do believe they have found their perfect match at the end of the month, they can sign the papers necessary to formalise the union.
Interestingly, one half of a 'Married At First Sight' couples from the US version saw a post of mine on Twitter a few weeks ago and he said that, one year on, he is still blissfully happy with his met-at-the-altar wife. The series is now about to screen season two in the US.
If these two people - who knew they were signing up to such a show - are consenting adults (and they are), let the 'outrage' ensue if the marriage breaks down! Let them cry over their gazillion toasters. But spending time being incensed for them? Nah. 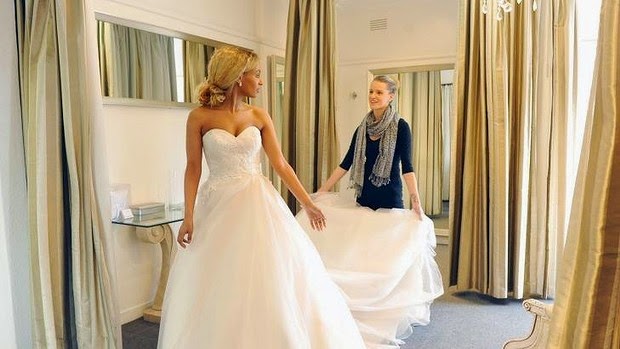