Robert De Niro was this year's keynote speaker at The Tisch School of the Arts and gave the 'Tisch Salute'. The speech also featured remarks by department chairs, a PHD hooding ceremony, student and faculty processionals as well as two live performances. 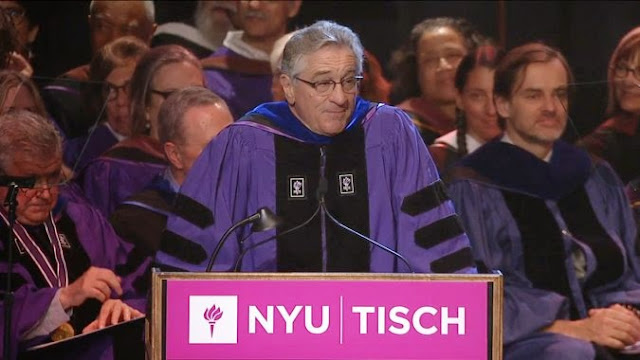 He told the 2015 graduating class of New York University’s Tisch School of the Arts on Friday. “You made it,” before the Oscar-winning actor added, “and you’re f--ked.”
The majority of the audience roared with laughter.
The crowd of aspiring actors, dancers, writers, directors, photographers, and filmmakers was told by De Niro that the nursing graduates “all have jobs,” the business graduates “are covered,” and the law students they’re employed, ”And if they’re not who cares? They’re lawyers,” added De Niro cheekily.]
Adding that he admired the graduates of the accounting school, he knew the artists didn’t have a choice when it came to their career paths. “You discovered a talent, developed an ambition, and recognized your passion,” he said. “When you feel that you can’t fight it, you just go for it. When it comes to the arts, passion should always trump common sense.”
“Yeah you’re f--ked,” De Niro added. “The good news is, that’s not a bad place to start.”
As to how to deal with the rejection that populates he added, “I hear that Valium and Vicodin work.” He then recounted some stories of his own rejections, including auditioning to play Martin Luther King, Jr. in Selma, a part he told the graduates he “could’ve played the hell out of.” WOW.

He ended his speech by telling the crowd that he was there to hand out his photo to the directing and producing graduates.

Email ThisBlogThis!Share to TwitterShare to FacebookShare to Pinterest
Labels: Actors, Everyone is talking about, Hollywood, Inspiration, This Just In, Viral Videos