'Beyond Right & Wrong: Stories of Justice and Forgiveness': WIN Tickets

Kweku Mandela Amuah, grandson of the late Nelson Mandela, will visit Australia from 20-24 October 2014 to spread the message of peace and justice, joining award-winning filmmaker Lekha Singh for the Australian premiere of Singh’s award-winning documentary 'Beyond Right & Wrong: Stories of Justice and Forgiveness'.

“I've traveled all over the United States promoting Beyond Right & Wrong, and I can tell you, no one walks away unchanged, unwilling to listen, unable to understand,” said Mandela Amuah in hisHuffPost Impact blog.

'Beyond Right & Wrong: Stories of Justice and Forgiveness' not only has a strong message of peace around the globe but is aiming to raise $500,000 for selected charities worldwide through online viewings of the film via online platform FilmRaise.

There will be a Q&A with Kweku Mandela Amuah and Lekha Singh (plus Anna Bligh on the Monday night event only).

Beyond Right & Wrong: Stories of Justice and Forgiveness - Public Trailer from Lekha Singh on Vimeo.

In the documentary, Beyond Right & Wrong, a woman who survived the death of her five children struggles to forgive the man who killed them during the Rwandan Genocide. A victim’s daughter strikes up an unusual friendship with the bomber who killed her father during the conflict in Northern Ireland. And two men—one Israeli, one Palestinian—form a bond after tragedies claim their daughters.

“Singh’s film gets to the root of this important conversation about our ability as humans to discuss, understand, repair, and rebuild, even in the most painful circumstances,” said Mandela Amuah. “It shows how survivors of tremendous hurt and anger can reach a point where they can look their perpetrators in the eye and, in some cases, even forgive. Beyond Right & Wrong showcases the amazing progress humans can make, especially in my home of Africa, where some Rwandans have literally rebuilt their communities side by side with people who killed their loved ones.”

“These are human stories,” said Singh. “The stories broke my heart yet gave me enormous hope,” said Singh. “I hope this film illustrates the strength of the survivors and expresses the possibility of an alternative path towards justice, a solution rooted in neither violence nor hatred.”

'Josie's Juice' has ten double passes on offer for both the Monday night and Tuesday night screenings. Here is all you need to do to be in the running to win a double pass:

- Comment below on why you'd like to win a double pass AND email me at josiegags@optusnet.com.au so I can contact you in case you are a winner (so many people forget this step and don't enter a valid email address below, and I spend lots of time trying to track you down, or simply give the prize to the next person - not fun for anyone!)

(If you find it hard to comment below because your device won't let you - sometimes that happens on an iPhone, for example - simply send me your entry via email at josiegags@optusnet.com.au)

*Competition open to Australian residents only. Winners will be drawn several days before the events. Good luck! 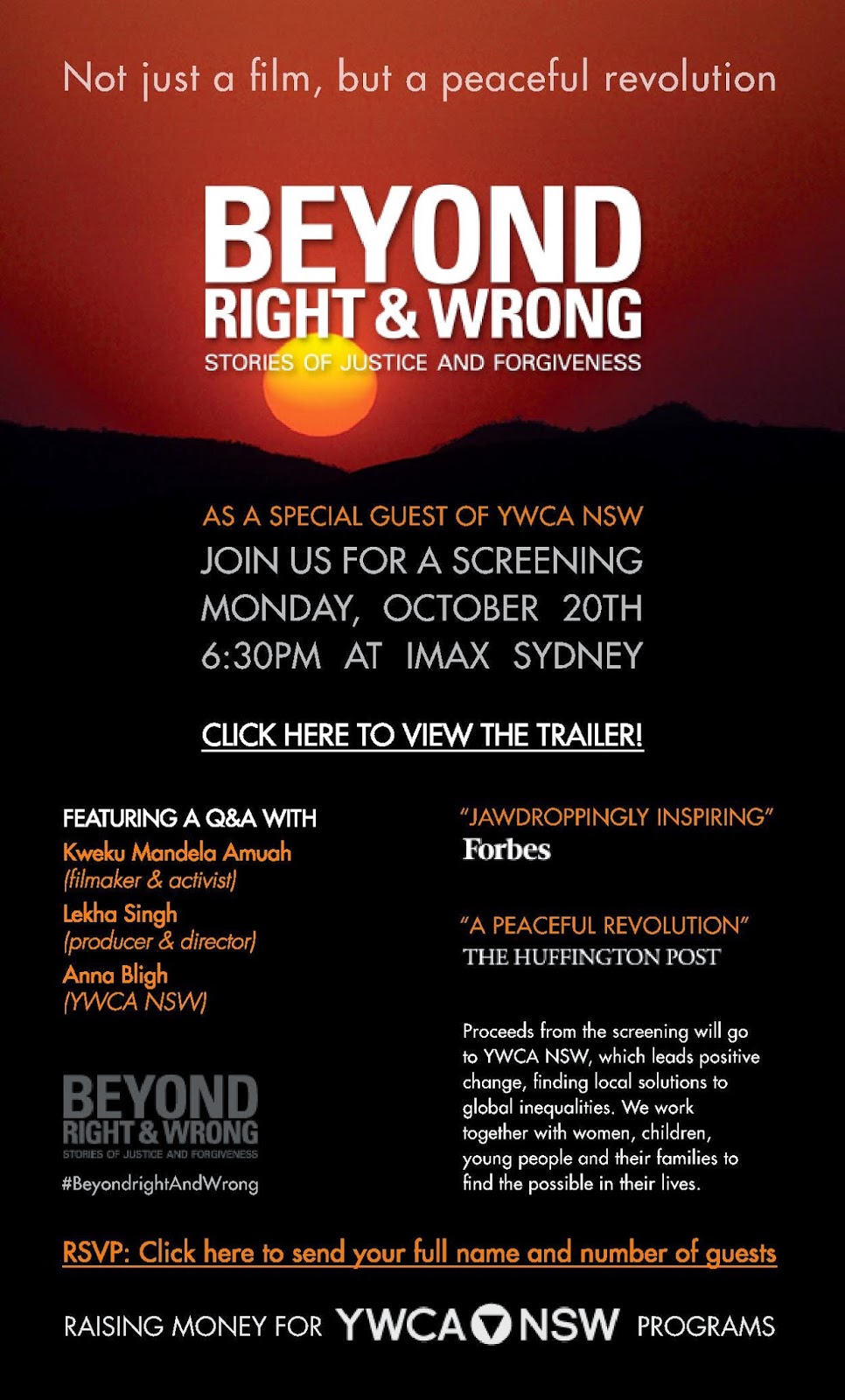 More about the movie:

ABOUT BEYOND RIGHT & WRONG:
Beyond Right & Wrong is freely available on FilmRaise. The Nelson Mandela Foundation and other charity partners (full list available here) can collectively earn up to $500,000 from a prize pot made possible by generous donations from Operation Kids Foundation and Share the Mic. Viewers can choose a charity to support by watching Beyond Right & Wrong at filmraise.com/beyond-right-and-wrong.