It's the book everyone is talking about today: Adam Boland's new book 'Brekky Central', published by Melbourne University Press. 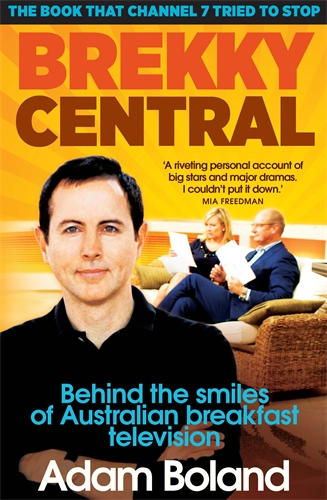 Here is Adam's promo trailer for the book - out TODAY. You can buy it here.

And here is what the publisher says about the book:

I thought I knew a bit about breakfast TV. I was wrong. What we see is nothing compared to what goes on behind the scenes. I was fascinated to read this brutally honest account of so many stories that have become Australian media folklore. The characters, the drama, the egos. It is an unflinching account from the man who has arguably had a greater impact on the way we watch TV than anyone since Graham Kennedy.' MIA FREEDMAN

Between Sunrise and The Morning Show, Adam Boland oversaw thirty hours of network television a week, turning a daggy finance nerd and a suburban mum into household names. He even helped propel Kevin Rudd into The Lodge.
Now, for the first time, he takes us behind the camera, inside the Sunrise family. Brekky Central is the story of the most competitive timeslot on television; the stakes are high and so are the pressures on those who show up each morning to win the ratings. Along the way, celebrities do what celebrities do, television executives outmanoeuvre each other and presenters succeed or fail.
This is a world of hellishly long hours, of silliness and seriousness, an extraordinary mix of egos, scandals and drama but also a celebration of the magic that is television.

Adam Boland grew up wanting to work in television. By the tender age of 23 he was working at Channel Seven as executive producer of the pre-Olympics program. Three years later Adam was given control of the morning program, Sunrise, and Australian breakfast TV changed forever. Sunrise quickly became the country's top-rating breakfast show, turning its hosts, Mel and Kochie, into household names and helping two little-known MPs, Kevin Rudd and Joe Hockey hit the big time in politics.
Adam rewrote many of the rules of morning television with his coverage of the Beaconsfield mining tragedy and the introduction of live studio performances. He helped organise Reach Out to Asia, a historic primetime concert on the steps of the Sydney Opera House, which raised $20 million for the victims of the Asian tsunami. In 2006, Adam created The Morning Show, with hosts Kylie Gillies and Larry Emdur, which instantly became the number-one program in its highly competitive slot. He joined Channel Ten in 2013 as the Network Director of morning television and resigned due to ill health at the start of January 2014, less than three months after the programs he created, Wake Up and Studio 10 were launched.
Adam is an ambassador for the Australian Foundation for Mental Health Research and Lifeline Canberra.
Are you keen on reading the book? Adam appeared on 'Australian Story' earlier this year, speaking openly about his bipolar disorder. You can watch the ep and read the backgrounder here.
Posted by Josie at 14:31

Email ThisBlogThis!Share to TwitterShare to FacebookShare to Pinterest
Labels: Australiana, Books, Everyone is talking about, This Just In, TV