It's here, you guys.

Sam and Lisa respond to the interview with Blake and Louise on last night's 'The Project', by Carrie Bickmore.

UPDATED: the full video interview is below the transcript here. 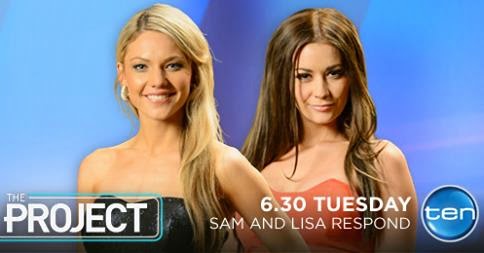 Here is what went down with Sam and Lisa, after they watched the footage that WE watched (as seen in the transcript, in the link above… get it?)

“That’s the biggest load of shit I’ve heard in my life.”

Adds Sam: "I had suspicions he was interested in someone else, because he’d said to me that he’d invested a lot of feelings in the top four, [but] when I raised my suspicions with him, he flat out denied it.”

“I would have preferred for him to say that because I don’t think it looks bad on me at all.”
Asks Carrie, did she have suspicions he had feelings for somebody else.

From last night's clip, Carrie asks: "How does a man how dumped you on live TV woo you again… and Sam responds to THAT letter Blake gave Louise.

Lisa says: "Well, he actually called me after the finale, and he said that he was quite upset about everything that had gone on, and I was giving him a bit of support but still letting Sam know that he was in contact with me, and then he asked me if I still had feelings for him, and I could still see a future with him."

Lisa's reply: "I told him to get lost… I said how dare you say that to me, and how dare you ruin the friendship between Sam and me. If you wanted to chose me, then chose me as your number one; I would never be second to anyone."

She adds: "I messaged Louise and told he tried to contact me… and she won't reply, I think she's a little bit too naive to actually believe it."

Lisa then adds that she's happy to have found her new friend in Sam. “I feel like I went on this journey to find Sam,” she says. Cute.

When, when will this drama end!?

To watch the entire interview, click here.
Posted by Josie at 20:00

Email ThisBlogThis!Share to TwitterShare to FacebookShare to Pinterest
Labels: Australiana, Controversy, Everyone is talking about, Men, The Project, This Just In, Women