'The Real Housewives of New Jersey' star Teresa Giudice and her husband Joe are heading to prison, but before they do (Teresa on January 5, for 15 months; Joe for 41 months, after she serves her time), the couple just spoke to Andy Cohen in an interview special for Andy's show 'Watch What Happens Live'. Check back in here for an Australian screen date. 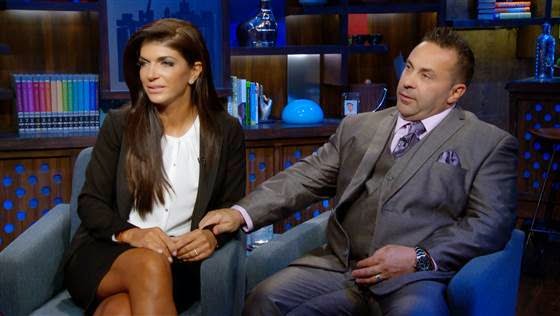 "I was shocked," said Teresa in a special preview clip which aired on USA's TODAY show on Monday (US time), referring to the sentence she received after pleading guilty to multiple fraud charges. "It was very unexpected."

Here is the preview clip:


Visit NBCNews.com for breaking news, world news, and news about the economy

Teresa's husband Joe will also serve three-and-a-half years behind bars, but the couple will serve their time consecutively so that their four children are not left without both parents.

After Joe completes his sentence, he could be deported, as he is not a US citizen. In addition, the couple must pay over $400,000 in restitution.

Teresa and Joe's full interview on 'Watch What Happens Live' will air in the US on October 6 at 11pm ET on Bravo.
Posted by Josie at 01:16

Email ThisBlogThis!Share to TwitterShare to FacebookShare to Pinterest
Labels: Controversy, Cult TV, Everyone is talking about, Pop Culture, Reality TV, This Just In